I recently had the opportunity to talk to four members of the US Women’s National Soccer Team, aka the USWNT: Megan Rapinoe, Christen Press, Meghan Klingenberg, and Tobin Heath.

They’ve been pretty hard to miss this summer, but just in case, here’s the nutshell: The USWNT won a record fourth World Cup title in July, and they’ve been on a for-the-ages victory tour full of utter joy, strength, and pride. 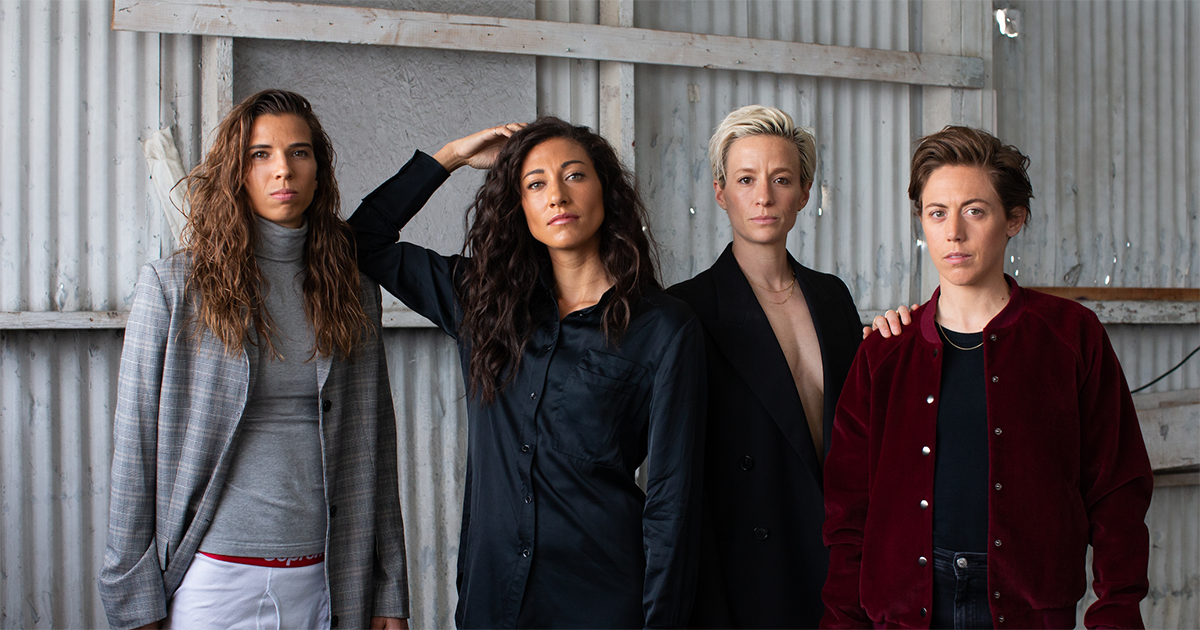 Like most everyone, we’re fans at Ellevest (especially our newest financial advisor, Kate Deines, who was a professional soccer player herself!). We love their playing, their outspoken personalities, and most especially how they came together as a team to fight for equal pay.

That fight’s not over. Last month, they broke off mediation talks, and the team will appear in court in May 2020. Also last month, the players announced they’re teaming up with the Time’s Up movement to raise money to fight for pay equity.

And if advocating for equality, epic celebration, and (oh, yeah) playing incredibly high-quality soccer weren’t enough — together, these four players have become entrepreneurs. They recently launched a company called re-inc, a “brand built to challenge the status quo.”

Challenging the status quo? We can relate.

I chatted with them via email about that fight for equal pay, how they keep their mojo under fire, and why they launched a company “for people looking for bold self-expression and non-binary design.”

What lessons did you learn from your fight for equal pay that you’d share with any woman or non-binary person looking to close their own gender pay gap?

Really, that some people are uncomfortable advocating for themselves. The word “negotiation” has a negative connotation – people think it’s scary or awkward. It’s crucial that women lean into the temporary discomfort and start thinking of this process as a collaboration.

Information is power. Before any negotiation, people need to take the time to research, study, and learn. The biggest mistake someone can make in a negotiation is not empathizing and understanding the goals of the other party. Equal pay and closing the gender pay gap cannot be achieved unless people start speaking up about the issues and advocating for themselves.

How do you maintain your mojo in the face of criticism? How do you support each other and get through it? Do you ever waver in their confidence and in your fight?

Unfortunately, criticism is inevitable. We believe it is our responsibility as role models to fight for what we legally deserve and speak up for women facing similar issues. When we feel discouraged by criticism, we remember that this fight is so much bigger than us as individuals and as a team. We are fighting for respect and equity for women everywhere.

Why did you decide to launch a start-up — as you were preparing for the World Cup and fighting a pretty big lawsuit? Any stories you can share about making the decision, or did it happen more organically?

Re-inc came about organically. We came up with the idea after the 2015 FIFA Women’s World Cup. We’ve been marketed, branded, and defined by others for years. We were tired of having limited say in our personal brands — we were ready to have a seat at the table. We wanted to take control and create something powerful.

It’s a purpose-driven lifestyle brand we founded. It exists to boldly reimagine the status quo — championing equity, creativity, progress, and art through our products. Re-inc starts with the art of the possible, while bringing intentionality and integrity to everything we do.

We recognize the importance of individuality and want to create customizable products for people looking for bold self-expression and non-binary design. Aside from our products, we want to create a collaborative culture and limitless community that inspires change-makers to challenge the status quo and fight for social equity.

Inclusion is at the core of who we are as individuals. Instead of fighting against the norms that society has created, we want to re-imagine them. Our goal is to create beautiful clothing that includes and accepts all people regardless of age, size, race, gender, etc. Re-inc is for everyone.

You’ve said re-inc will be going beyond streetwear to health & wellness and technology. How are you bringing your gender-neutral approach to those launches?

From our perspective, our company goes beyond a gender-neutral approach. We want to create a business that is purpose-driven that champions diversity and inclusion. We want to re-image the products we create and allow people to express individuality.

The first shirts from re-inc say “liberté, égalité, défendez.” How did you decide on that and what does it mean?

It’s a twist on France’s national motto, but we replaced the third word “fraternity” with “defend,” turning the motto into “liberty, equality, defend.” We want people to have the opportunity to interpret this any way they’d like, but to us it’s more of a mission statement for our company.

What’s been the most surprising part of start-up life for you?

The amount of support we’ve received. The support we’ve received from fans, other athletes, influencers, celebrities, and other companies has been astounding! We’re thrilled that so many people are ready for a new way forward and want to re-imagine the status quo with us. We’re excited to work together in opposition — toward greatness.