Concern Over BAME Medical Staff Dying on the Frontline - Could Internal Challenges Be a Contributing Factor?

When I woke up to the news that the Head of the British Medical Association had called on the government to investigate if and why black, Asian, and minority ethnic people are more vulnerable to COVID-19, after the first ten doctors in the UK named as having died of the virus were all BAME, it confirmed my worst fears.

They’re asking: Is there an underlying, and not so obvious link, between COVID-19 and the death of so many ethnic minority doctors on the UK front lines?

We know that genetics - a higher propensity towards certain diseases like diabetes and blood pressure - put certain ethnicities at risk, and family dynamics that include a joint family set-up might also be connected to the mortality rate. Socioeconomic inequalities have also been cited. But are there other less-recognizable forces at play, such as the internal challenges that women and ethnic minorities face?

BAME doctors often feel bullied and harassed at higher levels compared to their white counterparts. They are twice as likely not to raise concerns because of fears of recrimination.

Many doctors in my own circle have admitted how BAME doctors and nurses are usually very hesitant to complain about lack of PPE or raise any other complaints. Frankly, this connection is the most unsettling, because unlike physical attributes and events which are often outside our control, this internal lack of confidence and insecurity that marginalized groups routinely face is completely within our control to address.

[Related: Diversity Without Power is Still Not Enough]

After all, we already recognize "minority stress," the chronically high level of stress stigmatized minority groups experience that may be caused by poor social support, interpersonal prejudice, and discrimination. And then there is what is called acculturative stress, which is essentially psychological and social stress experienced due to an incongruence of beliefs, values, and other cultural norms between a person’s country of origin and country of reception.

In my book, I share my research survey from 300 women around the world. It was during this research that I made an important discovery: Many of the internal challenges women face are similar to those minorities face, including impostor syndrome, FOMO (fear of missing out), minority stress, perfectionism, stereotype threat, inability to self-promote and step up, fear of failure, fear of judgement, and fear of vulnerability.

Similar to what women experience, ethnic minorities are subject to social realities that augment their self-doubt. Often these social realities are shaped by acts of institutional racism (examples include: xenophobia, Islamophobia, or the Windrush scandal) which are then manifested at work as conscious bias, unconscious bias, and micro-aggressions. All this has led ethnic minorities to develop internal challenges - challenges that carry a deeper social context and are closely intertwined.

[Related: How to Avoid the Bias You Didn't Even Know You Had]

The aforementioned surmises were further substantiated in a survey I launched with Cherron-Inko Tariah during National Inclusion Week last year. The survey is designed to capture the experience of ethnic minority men and women working in the public and private sector.

Our survey reveals that more than 50% of respondents have experienced unconscious or conscious bias, and many others suffer from impostor syndrome, stereotype threat, shadeism, minority stress, lack of confidence and self-esteem, perfectionism, fear of vulnerability, fear of failure, tokenism bias, accent bias, and other limiting mindsets.

Another poll conducted by The Grey Area two weeks ago indicated respondents believe that COVID-19 would adversely impact employment opportunities and career growth for minorities. 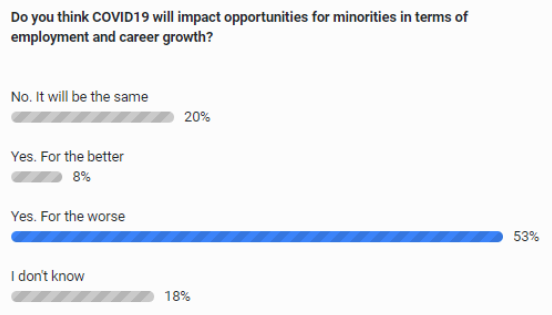 One participant shared the following:

It would be interesting to know why people have said yes. I think it is because minorities, especially black people, get the shortest straw.

Historically, ethnic minorities have faced far greater challenges in their careers, including isolation, discrimination, and low self-esteem. When I first started writing about impostor syndrome some years ago, I learned that it is racialized for people of color.

People of color also face what is called a "stereotype threat," a type of threat in which people feel at risk of confirming negative stereotypes associated with their social group. When marginalized groups feel like they have to represent not just themselves, but their entire social group, that additional pressure makes them more vulnerable to impostor syndrome.

The less you are able to relate to people around you, the less confident and competent you tend to feel. Valarie Young, the world’s leading impostor syndrome expert, notes that the syndrome “can rattle the confidence of even the most qualified, knowledgeable, or talented among us.” This pressure is especially intense in crucial situations like the pandemic we are facing as a global community.

Again, perfectionism is not just a female-specific issue; it seems to be multicultural one where the need to excel, prove oneself, and be "perfect" is entrenched in the mindset of minorities struggling to live up to expectations. Unfortunately, perfectionism is often perceived as a shield that will prevent judgement and social ridicule while alleviating the pain of inadequacy and being "less than."

This desire to be "seen" and perform above and beyond the call of duty and to work for more hours than is required may also lead to presenteeism. Presenteeism is the act of showing up to work sick, injured, overly fatigued, or otherwise not operating at normal levels of productivity, and is seen as a manifestation of insecurity about one's job. During an economic crisis, presenteeim is influenced by poor employment conditions, fear of unemployment, and employer/employee relationship, all of which automatically put ethnic minorities at a disadvantage.

[Related: Coping Strategies to Lead & Succeed As A Minority Woman]

Lack of self-esteem and confidence further discourages minorities from stepping up and showcasing their achievements and contributions (or even voicing concerns). Vulnerability is typically considered a weakness, hence members of marginalized groups do anything they can to avoid the appearance of not being "strong enough."

All these less-obvious factors highlighted above need to be taken into account when investigating the disproportionate number of ethnic minority deaths.

Many reports already point out how the coronavirus, similar to concerns around Brexit, will negatively impact certain groups disproportionately represented in the low-income bracket, i.e. women, ethnic minorities, the disabled, refugees and asylum seekers, elderly in care homes, and precarious workers, who are more reliant on public services and benefits, and thus have less disposable income and spending power.

Earlier recessions have also proven that the disadvantaged are less financially and socially resilient. And because they are more vulnerable, they are also more likely to excessively bear the economic brunt.

The UK unemployment rate is highest for black people followed closely by Pakistanis and Bangladeshis. Increasing racism and xenophobia, fear of how impartial exams and assessments put minority students at the most risk, and increased cases of gender violence and health risks for women are also growing concerns.

As alarming as this sounds, the coronavirus pandemic will change the face of many countries and the people living in them. The long-term economic and financial ramifications of the virus will negatively impact some more than others, but eventually it will impact all of us, irrespective of color and background. I am most concerned with how the crises may have a direct co-relation with the less obvious internal challenges that are difficult to pinpoint.

Sandro Galea, Dean at Boston University's School of Public Health, says the isolation as well as the uncertainty about how long lockdown will last contributes to increased anxiety. She further adds that those with a history of mental illness and other marginalized people are more at risk of struggling with the current status quo.

While the government may want to pursue measures to financially protect vulnerable communities, we must be as attentive to the mental health issues that may have come into play given the current crises. Undeniably, vulnerable groups already face pre-existing impediments within; all of which are closely intertwined and more likely to be exacerbated in an unfolding crisis. Organizations must make efforts to address these innermost barriers.

Perhaps I am being overly optimistic, but deep down in my heart there is also a tiny glimmer of hope that this virus will unite the world and bring the best out of humanity. Maybe the “good” of COVID-19 is that it can bring people closer together and close the racial divide, thereby supporting marginalized groups to overcome their hindrances.

We continue to hear that “we are all in this together,” and we truly are united in the fight to overcome this pandemic and be stronger for it. Now, more than ever, we need each other to lean on each other, stand together, and overcome our shared challenges as we work toward a better tomorrow. 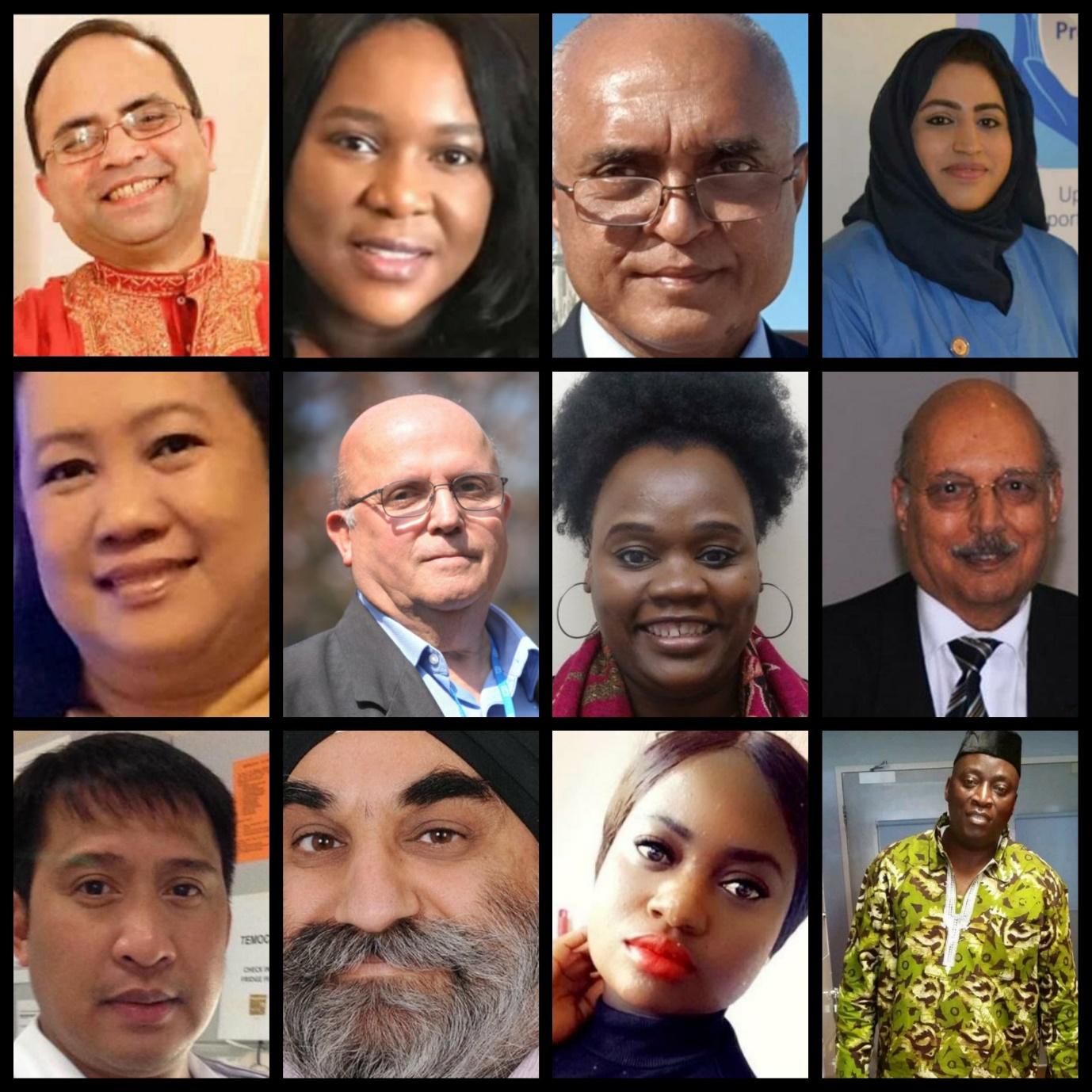 Hira Ali is an author, writer, speaker, and executive coach focused on women’s and ethnic leadership development, closing the gender gap, and breaking the glass ceiling. She is the Founder of Advancing Your Potential and International Women Empowerment Events and Co-Founder of Career Excel and The Grey Area. Contact her on Twitter, LinkedIn, Instagram, or Facebook. You can buy her book: Her Way To The Top: A Guide to Smashing the Glass Ceiling.

Hira Ali is a Leadership Trainer, Motivational Speaker, Writer, Executive Career Coach & Licensed NLP Practitioner. She is the founder of Advancing Your Potential and Revitalize & Rise. Over the past decade she has had the privilege of training & coaching hundreds of people belonging to various professions, cadres, ethnicities and across a wide range of industries with a 98% above average rating review. From teachers to students, from corporates to police officials, from business owners to students,... Continue Reading

Meet experts like Hira to talk about how to use these ideas in your career:
I'm Ready to Meet the Community