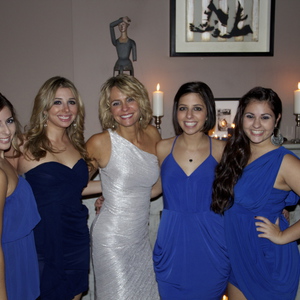 In the face of serious illness, marital infidelity, business struggles or other hardships, it can be tempting to throw up your hands and hibernate under the covers with a sappy movie and a bowl of frozen yogurt.

But then the movie ends, and the bowl sits empty. All that’s left is you and the road ahead. In these moments, perspective needs to kick in. By peering into the lives of other strong women and using them as role models for facing your struggles, it becomes easier to find that perspective.

Eleanor Roosevelt, Ellen DeGeneres and Robin Roberts all struggled with difficult circumstances and ultimately prevailed, despite criticism and controversy. Each woman had to withhold parts of her personal life to protect her reputation and career, and each drew upon her passion, drive, sense of humor and strong sense of self to succeed.

[Related: My Secrets to Resilience]

“You can often change your circumstances by changing your attitude.”

Eleanor Roosevelt’s life and words are a great source of inspiration. This first lady, author, philanthropist, and human rights activist suffered many hardships early in life. She was painfully shy and grew up with a verbally abusive mother and an alcoholic father, both of whom died by the time she was 10. She was sent away to school and had to prove herself among her peers.

As an adult, Eleanor participated actively in the politics and decision-making of the White House, changing the role of the First Lady forever.

But this trailblazing was not accomplished without a struggle. Eleanor fought for women’s rights during a time when men dominated all public spheres. She was also forced to deal with conflict in her personal life: her husband’s infidelity.

“The bottom dropped out of my own particular world,” she later said. “I faced myself, my surroundings, my world honestly for the first time.”

But by sharing her struggle publicly, she positively influenced the attitudes and decisions of women around the world.

“Accept who you are. Unless you’re a serial killer.”

Like Eleanor Roosevelt, one of America’s most-loved comedians had a difficult childhood, too. Ellen DeGeneres’ parents divorced when she was very young, and her stepfather molested her while her mother struggled with breast cancer. Her life challenges had a direct impact on her eventual career success, as she learned to use humor to weather the hard times.

Ellen became the first openly gay TV star when she came out on the cover of Time magazine in 1997. She made the monumental — and potentially career-killing — decision to speak up for herself and her rights; today, she empowers women to make the choices that are right for them.

“It’s about focusing on the fight, not the fright.”

Robin Roberts is an anchor on ABC’s “Good Morning America,” which has won three consecutive Daytime Emmy Awards for Outstanding Morning Program. Robin was at the height of her career when she found out she had myelodysplastic syndrome, a rare blood and bone marrow cancer.

Rather than withdrawing, Robin decided to continue working, receive treatment and share her diagnosis and story with the world. She remained optimistic throughout the whole process, with complete faith that she would beat the disease.

[Related: Quotes to Inspire You to Embrace Your Inner Strength]

Learn From the Greats

There are three main lessons female entrepreneurs can learn from these empowering stories:

Eleanor Roosevelt said, “Do what you feel in your heart to be right — for you’ll be criticized anyway.” Women, especially entrepreneurs, must follow their gut and take chances, regardless of the backlash they may face.

Robin Roberts spoke openly about her health issues, but never about her private life. It wasn’t until she faced a life-and-death situation because of her illness that she, too, was open with the world about her sexuality. Professional women have a lot at stake when they’re honest about their private lives, but it is possible to stay true to yourself and be successful.

2. Use the bumps in your path to learn, grow and gain perspective.

As the keynote speaker at the 20th annual Black Women’s Expo, Robin Roberts told the crowd to “Think big! Dream big! But focus small.” Her approach to her recent health challenges has made her a role model for women around the world who have been following her story.

Ellen DeGeneres used her childhood experiences to grow and become stronger. Despite the risk involved in coming out and the controversy she’s faced, she’s harnessed the positive energy of her supporters and stayed true to herself. Her courage in the face of adversity has made her a role model for women everywhere.

Eleanor Roosevelt realized early on that freedom was attainable only by dealing with hardships head-on and not looking back. “You gain strength, courage and confidence by every experience in which you really stop to look fear in the face,” she said. “You are able to say to yourself, ‘I lived through this horror. I can take the next thing that comes along.’”

When Robin Roberts announced that she had MDS, she told viewers through tears, “Bottom line: I am going to beat this. My doctors say it, and my faith says it to me.” A determined attitude sets you apart from the crowd, gives you a strong sense of authority, and can help you maintain professionalism and composure in the face of adversity. Face each challenge with passion, drive and the mindset that failure is not an option.

Ellen DeGeneres has fought mightily to get people to rethink what’s considered “mainstream” or “traditional.” Throughout her career, she’s chosen to lay it all on the table. She tells female professionals to take a close look at their own needs and never compromise their individual integrity.

Eleanor Roosevelt was famous for her positive attitude. One of her most famous quotes, “It is better to light a candle than curse the darkness,” inspires people to do something positive in times of trouble, rather than complain. As Eleanor proved, your own life challenges and the lessons you learn along the way can serve as a beacon for others facing similar obstacles.

Regardless of who we are, we all face struggles in our personal lives and in our businesses. We all have days when we feel utterly defeated, but the strongest don’t stay down for long. Sometimes, all you need is a reminder that you’re not alone.

This blog post was originally posted on: Project Eve

Hellen Barbara is the founder and president of Pubslush , a global crowdfunding and analytics platform for the literary world. An educator and a philanthropist, Hellen is the founder and former president of For the Kids Foundation, a nonprofit focused on education improvement in New York. She presently serves on the board of directors for the Gavin’s Got Heart Foundation and is a member of the Exceptional Women in Publishing organization. Follow Hellen on Twitter .

Meet experts like Hellen to talk about how to use these ideas in your career:
I'm Ready to Meet the Community