The annual Ellevate Impact Survey is a compilation of the accomplishments of the Ellevate community. This year we received responses from 1,108 professional women, 63% of them work for a corporation, nonprofit or in the public sector, 27% are business owners (they identified as entrepreneurs or self-employed), and 10% are in career transition.

"Be prepared, organized, know your worth, and practice your pitch."

Unfortunately, many women aren’t asking for a raise. Only 37% of survey respondents reported asking for a raise in 2015. Entry level and senior professionals seem to be more cautious about asking for increased compensation, with only 37% and 29% of women in these groups asking, respectively.

[Related: How to Make an Effective Request and Get What You Want From Anyone: A Two-Pronged Framework] 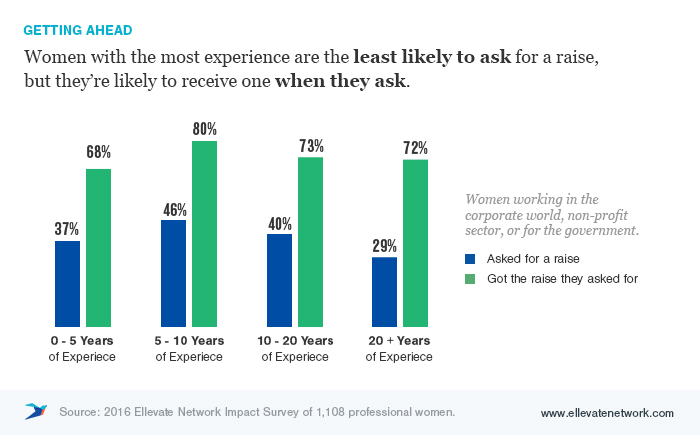 Mid-career professionals, those with 6-8 years of experience, are the most likely to ask for a raise (46%). Professionals in this group are seen as “hitting their stride,” and 77% of them got a raise last year, regardless of if they asked for one or not.

"Seeing what other women were able to overcome to succeed has emboldened me to the point where I have just asked for a promotion."

Success in getting a raise is a matter of building up the courage to make that ask, and knowing how to negotiate to get what you want.

Women working in client facing and negotiation-heavy roles like sales and business development are more likely to ask for raises than people in more operational functions like marketing, finance, and consulting. Yet, they aren’t the most successful in actually receiving the increase in compensation. 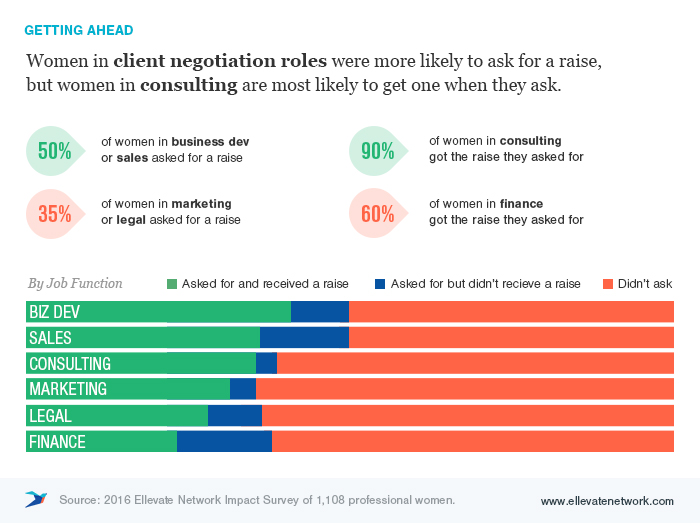 [Related: What Advice Would You Give Someone Who Wants to Get a Raise?]

It’s interesting to see that a lot of women reported receiving a raise without asking for one. In total, 82% of women in marketing functions got raises, although only 32% of them asked for one.

Opposed to what the media says, women are ambitious. Ellevate women are not afraid to get promoted and look for more leadership opportunities. 33% of members were promoted and 12% made a lateral move in their company. Getting their next promotion is the near-term goal for 22% of the community.

Staying Put and Moving On

Women in the Ellevate Network stay with their employers longer than the national average. In 2015, 76% of respondents stayed with their same employer, up from 73% in last year’s survey.

Retention rates increase as a woman moves up the ranks: 71% of entry-level professionals reported staying with their employer in 2015, compared to 73% of mid-career professionals, 78% of experienced professionals, and 84% of senior executives. 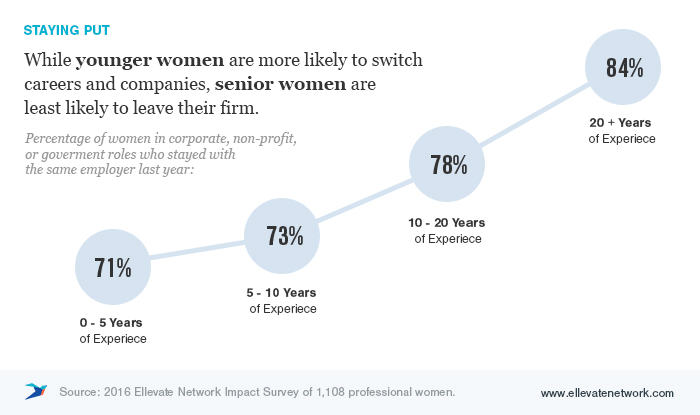 The most cited reason for leaving was having a better offer from another company in the same industry (45%), followed by changing careers (39%). Reasons for leaving varied by career stage: experienced professionals are more likely to leave their jobs to go to another company in their industry (63%), while mid-career professionals are more likely to leave in order to pursue a different career path (52%). 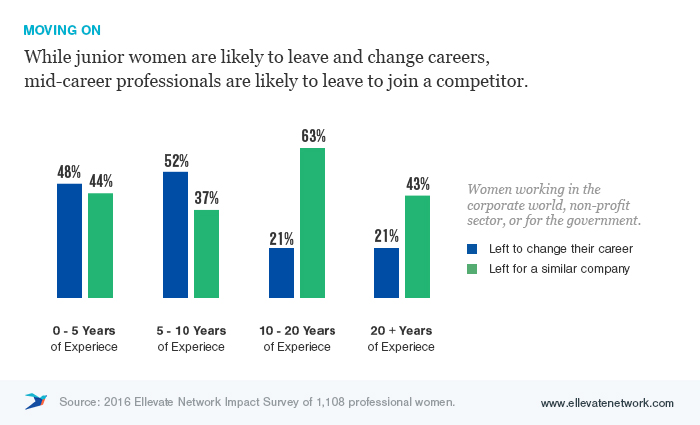 [Related: This Is What Women Care About When Looking For a Job]

Of the industries that are most represented in the Ellevate community, finance and law have the lowest attrition rates (22% and 23% respectively).

We know the gender pay gap and the gender achievement gap exist, but we can close them.

Women earn 77 cents for every dollar a man makes (or 78, or 79….depending on different factors and where you get your data). If you look at a list of large company CEOs, there are more men named John than women.

At Ellevate, we believe that if we work with companies to help them further their diversity efforts from just talk to action, we can make a difference. And above all, we believe that if we can help one woman get to the top and to a leadership position, she will help bring other women up with her. We can help achieve this by providing her with a network she can lean on and learn from.

About the Ellevate Impact Survey:

The annual Ellevate Impact Survey is a compilation of the accomplishments of the Ellevate community. Every year, we survey hundreds of professional women who are leading the charge in their fields or making their way up the ranks. We do this for several reasons:

And yes, we want to brag about the fantastic women in our Network.

Read what women business owners had to say.