Getting More: What the Ellevate Impact Survey Tells Us About Women Getting What They’re Worth

We asked the members of our network what they accomplished in 2016 — career milestones, career reinventions, new jobs, new goals — and what we found told us a lot about the way women manage their compensation. We all know that the gender wage gap exists, but our survey gave us some insight as to why it persists.

Some studies say that men and women are asking for raises at the same rate, and that women simply aren’t receiving those raises. Interestingly, our survey results showed something a little different. 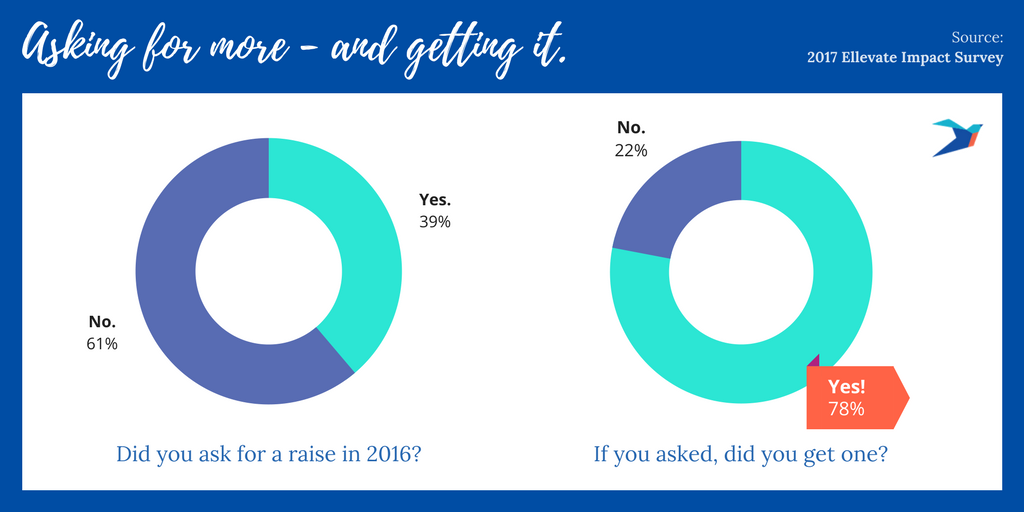 When we asked our members why they didn’t ask for a raise, there was a mixed bag of reasons:

In contrast to these answers, research by Payscale in 2014 shows that 31% of women were not asking for a raise because they felt uncomfortable negotiating.

So, no, not enough women are asking for raises, and it’s for many different reasons. But we did find that those who asked were mostly successful. 78% of members who asked for a raise received one. That’s quite a success rate. But, if we’re going to close the gender pay gap before the predicted 200+ years, we need more than 39% of women to start asking for the raises they deserve.

Read up on the best ways to make sure you’re getting your worth. We really believe that making an impact on a large scale starts with you — the individual — committed to making a change for yourself.

To learn more about what stops women from asking, and about what our members are negotiating beyond their raises, download our full Impact Report here.

Ellevate Network believes that providing professional women with the resources they need to be successful at work is the key to changing the world. Our community of professional women is highly accomplished, working towards gender equality every day. Learn More about Ellevate.