How to Produce, Write, and Star in Your Own Movie... and Everything Else You Wanted to Know about Hollywood 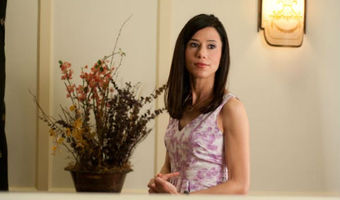 Have you ever wondered how Matt Damon, Ben Affleck, Billy Bob Thornton, Owen and Luke Wilson, Sylvester Stallone and Nia Vardalos (BIG FAT GREEK WEDDING) got their start? They did it themselves!

All of these people had acting careers before their hit movies, which they created, “put them on the map.” They were working actors, not stars, before they took control of their careers and created their own projects…and with a little luck and lots of perseverance the projects they created made them household names today.

Now 85 Broads member Sybil Temtchine has done the same, with the help of powerful and well-known women all around the world. Sybil has starred in films opposite Oscar winners Helen Mirren and Adrien Brody as well as starred in several television series opposite Ving Rhames, Skeet Ulrich and many others. Now Sybil has finished shooting AUDREY, which she produced, co-wrote, and in which she stars. AUDREY is a wonderful and powerful, female driven comedy about facing all insecurities we secretly and not so secretly have as women.

During the Jam Session, Sybil will be sharing how she got into the film industry, came up with the idea and cast for “Audrey,” raised funding, and used women’s networks such as 85 Broads to succeed. And of course she will be answering all of those Hollywood “behind the scenes” questions you might have always been curious about.