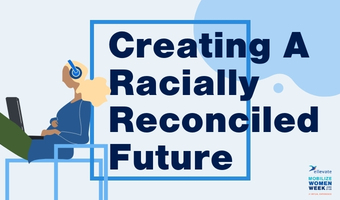 Join our powerful closing session to discuss openly, probably uncomfortably, and most definitely critically the actions, acceptance, and awakening the human race needs for a racially equalized future.

Last year the murders of George Floyd, Breonna Taylor, and Ahmaud Arbery ignited America in protest and in conversation.

However, the exponential impact of the pandemic on people of color, the cultural crisis that is resulting from the deaths of Native American elders, increases in hate crimes against the AAPI community, have not disappeared.

Discourse is not enough.

If we want to turn the corner and eradicate systemic racism we need to be actively anti-racist. This means taking an uncomfortable look at ourselves, our organizations, and the foundation of our society.

In this powerful conversation you’ll:

More on our Speakers for Creating a Racially Reconciled Future

“When you start out in the entertainment industry, there are many spaces where you are taught to be seen and not heard. As women, these messages are reinforced on deeper societal levels. As I grew in my career, learning to speak up and use my voice was the most difficult, but powerful thing I could do for myself and my trajectory.”

“I believe that one of the most powerful things you can do as a leader is creating a space where your employees feel seen, heard, and respected.”

Manju Kulkarni, Executive Director of Asian Pacific Policy and Planning Council(A3PCON) spent her childhood growing up in Montgomery, Alabama after her family immigrated from India. Her passion for civil rights stemmed from the instances she would witness or experience discrimination based on her skin color.

In addition to serving the AAPI community in LA through her work at A3PCON, Manju is passionate about promoting civic engagement among South Asians. She is one of the co-founders of Stop AAPI Hate, an organization formed in response to the increase in xenophobia resulting from the COVID-19 pandemic.

“You know, we’re on this hamster wheel of life and we keep tiring ourselves out in terms of how hard we work. It’s only when we step off the wheel that we can think deeply and realize our priorities.”

“The reason we’re even in the U.S today is because of the Civil Rights movement. So many South Asians today are racist, and don’t understand that they have the black population to thank for being here in the U.S.[…] In today’s climate, we’re seeing a lot of activism against South Asians and people of color. So until we band together, become more civically engaged and acknowledge the state we live in, it’s just going to get worse.”

Tokata (Future) Iron Eyes, Youth Activist, is a member of the Standing Rock Sioux tribe and has been confronting injustice since she was 9 years old when she testified against a uranium mine in the sacred Black Hills. When she was 12, she spoke out in a video against the route of the Dakota Access oil pipeline - that video went viral. Now in college, Tokata continues her work to advocate for the rights of indigenous people and environmental protection. She has spoken on several occasions alongside Greta Thunberg.

This past year, there’s been a spotlight on the many flaws within our society.

While it’s no secret that the world has never been fair, the pandemic showed how broken our healthcare, economic and justice systems really are.

At Mobilize Women Week, your perspectives will be challenged at one of our daily feature sessions. At Roundtables, Mentoring Meetups, and Workshops throughout the week, you’ll find a safe space to process what you heard among your peers in at least one of our five programs.

We deserve a better world, and we can make it a reality - together.