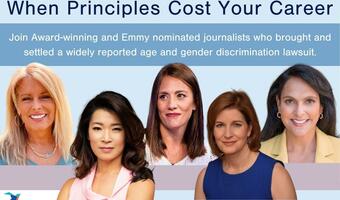 Would you sacrifice your career for a principle?

Their names are probably familiar to you. Award-winning and Emmy nominated, these journalists worked at the cable news station NY1, where they reported on everything from Hurricane Sandy to the Tony awards. Together, they brought and settled a widely reported age and gender discrimination lawsuit against the cable company Charter Communication, the parent company of NY1. As part of the agreement, all left the station, which effectively ended their careers.

Ellevate New York is honored to have these courageous women as our featured guests for a special International Women's Day discussion.  Starting at 12 PM ET on March 8th, Farinacci, Lee, & Ramirez, Shaughnessy and Torre will address in a one-hour conversation:

- Why NDAs need to be abolished

- Pivoting to a new career

Please join us for what promises to be an insightful conversation!

Register for another session in New York.