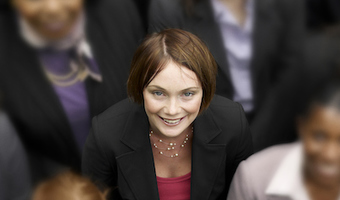 This book tells the story of a real-life heroine, a young entrepreneur whose business created jobs and hope for women in her neighborhood during the Taliban years. The story behind the book grew out of a trip to Afghanistan in December 2005 when Tzemach Lemmon was assigned to write a story for The Financial Times and a case for Harvard Business School on Afghan women entrepreneurs.

While in Afghanistan she met Kamila Sidiqi, an unlikely breadwinner who had become an entrepreneur under the Taliban. Desperate to support her five brothers and sisters at home and banished from Kabul’s streets by the Taliban, she started a dressmaking business in her living room which offered work to 100 women in her neighborhood. Together these unsung heroines made the difference between survival and starvation for their families despite—and sometimes because of—the Taliban. THE DRESSMAKER OF KHAIR KHANA tells their story for the first time.

About Gayle:
Gayle is the deputy director of the Council on Foreign Relations’ Women and Foreign Policy program. Prior to joining the Council, Ms. Lemmon covered public policy and emerging markets for the global investment firm PIMCO, after working for nearly a decade as a journalist with the ABC News Political Unit and “This Week with George Stephanopoulos.” Gayle has reported on entrepreneurs in conflict and post-conflict regions for the Financial Times, New York Times, International Herald Tribune, the Daily Beast, and Christian Science Monitor, along with Ms. Magazine, Bloomberg, Politico and the HuffingtonPost. She has appeared on NBC News, National Public Radio and on cable outlets including MSNBC, and has published papers on women and business for the World Bank, the International Finance Corporation, Harvard Business School, and the Center for International Private Enterprise. Gayle earned a BA in journalism summa cum laude from the University of Missouri School of Journalism and an MBA from Harvard Business School, where she received the 2006 Dean’s Award for her work on women’s entrepreneurship. She speaks Spanish, German, and French and is conversant in Dari. A former Fulbright scholar and Robert Bosch Foundation fellow, she serves on the board of the International Center for Research on Women.