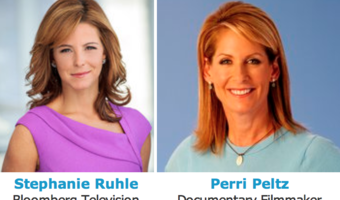 &lt;b&gt;What are the secret ingredients? Self-awareness? Disposable income? Resources? Is there really a formula?&lt;/b&gt;Join us for a conversation between these trailblazing women and learn ab...

<b>What are the secret ingredients? Self-awareness? Disposable income? Resources?
Is there really a formula?</b>

Join us for a conversation between these trailblazing women and learn about how they reinvented their careers and are doing what they’re passionate about.

<b>Stephanie Ruhle</b> began her career at Credit Suisse, where she was the highest producing credit derivatives salesperson in the U.S., and later served as a Managing Director at Deutsche Bank. Now, Stephanie is a co-host of Market Makers on Bloomberg Television where she regularly interviews industry titans.

<b>Perri Peltz</b> is a documentary filmmaker and public health advocate who began her career as a television news journalist at WNBC-TV and NBC News. Her film, Remembering the Artist Robert DeNiro, Sr., premiered at the Sundance Film Festival in January this year and will air on HBO on June 2014.

To learn more about Stephanie and Perri, click <b>here:http://static.85broads.com/bcastimages/reinvention_bio.pdf</b>.

We understand that plans change, but if you can’t attend please let us know at least 7 days before the event. No refunds will be given after this timeframe.