INTERNATIONAL WOMEN'S DAY celebration, with a screening of "Waiting for Arif" 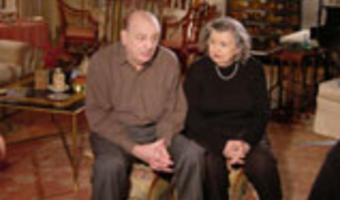 Women Inspired by the Network (WIN) is proud to celebrate INTERNATIONAL WOMEN&#8217;S DAY with a screening of Waiting for Arif, an award-winning documentary Followed by a Q&amp;A with Latife Mardin...

Women Inspired by the Network (WIN) is proud to celebrate

with a screening of

Waiting for Arif,
an award-winning documentary

Followed by a Q&A with Latife Mardin

Directed by Didem Yilmaz, Creator, Director and Producer of Waiting for Arif

Latife Mardin is married to possibly the busiest man in the world. The 12 times Grammy award winner, record producer Arif Mardin has been busy for the past 45-years creating successful musical careers for stars such as Aretha Franklin, Bee Gees and Norah Jones, to name a few. But that takes a toll on their marriage and keeps Latife waiting. In this humorous but insightful documentary the couple shares for the first time their thoughts about why they believe their marriage has lasted so long.

Women Inspired by the Network (WIN) Special Interest Group’s goals are to inspire its members and to establish a network, not only a networking platform. We will have informal meetings and inspirational speaker series like “Tell Your Story.” We would like to thank our sponsors: Anonymous (Platinum); The Acar Law Firm, Marathon Line N.Y. Inc. and Miles to Go (Gold); and The Marmara-Manhattan (Venue Sponsor).

Latife Mardin’s story with her own words:

“I was born in Istanbul. I attended the Sisli Terakki Primary School and then went to the English High School for Girls and American College. I worked as Assistant Director for the film ‘Salgin’ and the documentary ‘The Tale of a City’ which were produced by Ali Ipar and photographed by Ilhan Arakon. Later on I was employed as interpretor-translator at the Labour Institute in Istanbul. The Labour Institute had been created by the International Labour Organization. Along with Berin Kilic Insel, I started the work of simultaneous interpretation in Turkey. Although we had no earlier training whatsoever, we managed to interpret simultaneously and then translate the texts using English, French and Turkish. It was a challenge, but it was terribly interesting because along with the experts from various European countries, Labour Inspectors from Middle East countries such as Israel, Egypt, Iran, Iraq, Greece and Lebanon attended our three month long seminars.
I married Arif Mardin in 1957. I had been divorced from my first husband for six years. It had been a difficult marriage, but it gave me the opportunity to visit Europe immediately following the World War. London and Paris were always cities that I wanted to visit. Although the ravages of war were apparent, there was incredible cultural activity going on, especially in London. The Old Vic was in full swing. You could see actors like Laurence Olivier, Ralph Richardson, Alec Guiness, Margaret Leighton and many others.
I had known Arif for a long time. His sisters, Leyla and Betul were my friends. His father wanted him to join his firm, but he wanted to be a musician. Quincy Jones recorded his music and recommended that the Beklee College of Music in Boston give him a scholarship. So we came to Boston.
It was not easy to get a job in those days unless you had a green card. I was offered a job as a librarian at Harvard, but could not take it. The only possibility was the United Nations Secretariat. As my mother tongue was Turkish, I could not get a job as a translator, let alone interpreter. I learned how to type and worked there for six years. This enabled Arif to get a job on my visa. I have written a book called ‘Emeralds and Kings’, also four consecutive novels published in translation in Turkey. My play ‘The A Word’, was produced Off-Broadway and ran for six weeks.
I have three children, Nazan, Joe and Julie.”

Didem Yilmaz began her career in 1990 as a journalist. While pursuing her bachelor’s degree in Cinema and Television at Anadolu University in Turkey, she became particularly passionate about documentary filmmaking. Her first documentary, “Tevellut 1340”, explored the perceptions of ‘old age’ at a retirement home. Her second documentary “Devrim, Eskisehir,” was a group project, about the first Turkish-made car and the engineers who built it. Both of these documentaries won numerous awards and prizes from festivals. After graduation, she worked as a producer/ director for a cable television station. She created, produced and directed eight television series on cultural and social issues for a variety of audiences involving over three hundred programs, including “ live” and “ primetime” programs. She received her master’s degree in Media Studies and certificates in Media Management and Film Production from the New School University, New York. During her education she produced/ directed short films and music videos. Her thesis project “Seeking the Sultan,” on the subject of the Ottoman Family that ruled the Ottoman Empire, before the founding of the Turkish Republic in the 1920’s, was featured in numerous film festivals in the United States, broadcast on CNN-Turkey, and was nominated for the Student
Academy Awards by American Film Academy. She is currently working as a freelance producer, director and collaborator on film and video projects in New York City.

By Subway
Take the Q, R or W train to the 8th Street/NYU station. Walk three block West along 8th Street to University Place. Walk One block south to Washington Mews and make a right. The entrance is at 42 Washington Mews.