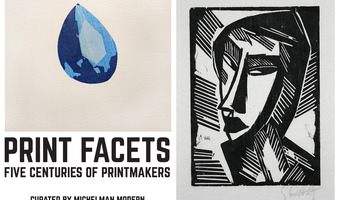 Are you an art lover? Just a bit curious about art? Do you ever wonder&nbsp;what your life would have been if you'd followed that passion instead of going into the corporate world? &nbsp;Ann Moore,...

Are you an art lover? Just a bit curious about art? Do you ever wonder what your life would have been if you'd followed that passion instead of going into the corporate world?  Ann Moore, former Chairman and CEO of Time Inc, invites you to her new art gallery in Chelsea. Ann will share with us her experience in transitioning her career from the corporate world to the art world.

Art Advisor and Guest Curator Rebecca Michelman will walk us through the treasure hunt of this exhibit that spans relief, intaglio, lithography, and screen printmaking. Rebecca tracked down rarely seen work by seasoned artists from California to Paris. Visits to master printers uncovered prints from their personal collections as well as unseen works of their own. Contemporary living artists are juxtaposed with old masters including Goya, Rembrandt, Hopper, Picasso, and Warhol. Selected prints for sale in the show are from editions in the permanent collections of MOMA, the Whitney, and the Met.

Ann Moore served as Chairman and Chief Executive Officer of Time Inc.from July 2002 to September 2010, retiring as Chairman in January 2011. Time Inc. publishes more than 115 magazines, including 22 in the U.S., which are read nearly 235 million times worldwide on a monthly basis, and account for approximately 20 percent of total advertising revenues of U.S. consumer magazines. Under Moore’s leadership, Time Inc. established itself as one of the top media companies online, with 26 U.S. branded websites reaching 52 million users each month.

Previously, Moore was Executive Vice President of Time Inc. since July 2001, responsible for the business and development operations for several of the most popular consumer magazines in publishing—TIME, People, InStyle, People en Español, and Real Simple. In addition, she managed the consumer marketing division of Time Inc. Moore joined Time Inc. in 1978 as a corporate financial analyst and subsequently served in key executive positions at Sports Illustrated, Fortune, Moneyand Discover magazines. She was the founding Publisher of Sports Illustrated for Kids in 1989, until going to Peopleas its Publisher in July 1991.

She was named President ofPeople in 1993. During her tenure, Moore took what was already the most profitable weekly magazine in the U.S. to new heights of success, both domestically and internationally. People grew from a single title to the centerpiece of a thriving magazine family—spinning off the Australian Who Weekly, followed by InStyle, People en Español, Real Simple and People StyleWatch, as well as InStyle’s growing international franchise.

A native of McLean, Va., Moore graduated from Vanderbilt University in 1971 and received her M.B.A. from Harvard Business School in 1978. She joined Time Inc. later that year.

Moore serves on the board of directors of Royal Caribbean Cruises Ltd., and The Wallace Foundation. Her numerous awards and honors included her appearance on Fortune magazine’s list of “The 50 Most Powerful Women in American Business” for the first twelve years of its existence.

In 2003, Moore received the first annual Time Warner Civic Leadership Award, which recognizes the senior executive at the company who does the most to foster a spirit of employee volunteerism and corporate responsibility.