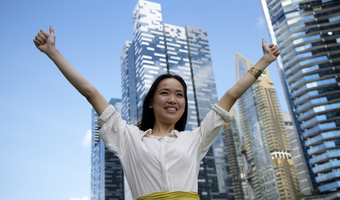 In a world that is constantly changing, how do you stay on track with your career?&nbsp;Having a professional mission will help you stay true to your values, help you make tough&nbsp;decisions, and...

Claire O'Connor is a Managing Director and Head of Loan Capital Markets at Barclays. Based in New York, Ms. O'Connor is responsible for leading the origination and structuring of acquisition and corporate financing for clients in the Americas. She is also Chair of the firm's Capital Commitment Committee.

Ms. O'Connor has been with Barclays Capital, and previously Lehman Brothers since 2005, having joined from JPMorgan Chase. She held a wide variety of positions at JPMorgan Chase focused on loan syndications, asset-backed securities, Euromarket financing, sovereign debt restructuring, and investment banking coverage.

Ms. O'Connor has an AB degree in American Studies from Mt. Holyoke College. She is on the Board of Directors and Executive Committee of the Metro NY Chapter of the US National Committee for UN Women, is Co-Chair of Barclays women’s network (WIN) in the US, and is actively involved in mentoring, recruiting and advising social entrepreneurs.

Amanda Kraus is the executive director of Row New York. She founded the organization in 2002 in an effort to make the sport of rowing, paired with top-notch academic support, accessible to young people in NYC. In addition to her work at Row New York, she was a United States fellow to South Africa through a sports based youth development exchange. She is a regular blogger on the Huffington Post as well as an Adjunct Associate Professor at NYU’s Wagner School of Public Service.

Amanda has an MA in Education from Harvard and a BA in English from the University of Massachusetts at Amherst, where she was captain of the women’s crew team, a member of the DII National Championship boat, and a member of the Commonwealth Honors College.

Elizabeth has been a leader in the global health field for over 15 years. She is the Co-founder and President of Care2Communities which provides life-saving medical care to families in the developing world. C2C's game-changing container clinics have served more than 45,000 families in Haiti and Namibia since 2010. Elizabeth has been interviewed regarding the pioneering work of C2C by The New York Times, Stanford Social Innovation Review, The Boston Globe, The Providence Journal, Architectural Review and National Public Radio. Elizabeth is a frequent speaker on the development of innovative and sustainable models that change the way health care is delivered to the poor in the developing world. She has spoken at:

Prior to her work with C2C, Elizabeth worked as a Physician Assistant in emergency rooms in the US for a decade and later, as a humanitarian aid worker, she worked in Africa and Asia. Elizabeth holds a BA/Science from Holy Cross College, a Master of Health Science from Duke and an MPH from LSHTM and LSE. She is the recipient of the Alumni of the Year from the Duke PA program and was inducted into the Duke University Medical Center Hall of Fame.

Sophia has a combination of 19 years of legal experience in the financial services industry and private law firm practice. Sophia was previously deputy general counsel of block trading venue Liquidnet, where she served as liaison with global regulators regarding equity market structure issues, set up an ATS in each of the US, Canada and various countries in Asia Pacific and advised on strategic partnerships, acquisitions, financings, and intellectual property and technology matters. Between 2000 and 2004, Sophia served as associate general counsel at agency-only broker ITG. Sophia also spent 4 years as a mergers & acquisitions associate at Paul, Weiss, Rifkind, Wharton & Garrison.