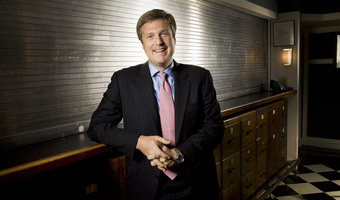 
John joined BBDO in 1991. Over the years, he has demonstrated that he is an energetic, positive and passionate leader with a proven ability to build strong client relationships and to lead big multi-disciplinary teams in the creation of powerful communication programs. For example, he has been actively involved with many of the agency’s clients including FedEx, GE, Sony, Lowe’s, Monster and Mars. He began his BBDO career on Pepsi and was the principal architect of the agency’s integrated marketing efforts, expanding the agency’s service offerings to include digital marketing, direct, CRM, custom-publishing and more. He was named President and CEO of the New York agency in February 2004. In January 2006, BBDO was named “Agency of the Year” by all of the leading trade publications (Ad Age, Adweek and Campaign). And this past year, it was named “Creative Agency of the Year” by Shoot magazine and business-to-business “Large Agency of the Year” by BtoB magazine. <br><br>

Among John’s notable accomplishments was his involvement with the “New York Miracle” campaign, which helped lift spirits of New Yorkers in the wake of the September 11 attacks. In addition, John has lent his talents to other important causes. He is President of the Board of Directors of the Police Athletic League of New York, and also serves on the Boards of the American Advertising Federation (AAF), the Christopher and Dana Reeve Foundation, the New York Chapter of the American Association of Advertising Agencies (4A’s) and the Dartmouth College Alumni Club of New York City. He’s an active supporter of New York University’s Child Studies Center as well as Big Brothers/Big Sisters, for whom he has served as a mentor to Cory Collins for eleven years. <br><br>

In recognition of his accomplishments, in 2003, John was inducted into the AAF Hall of Achievement, which honors people 40 years of age or under for their contributions to business. He has also been named to the Crain’s New York Business list of “40 under 40” as well as BtoB magazine’s “Who’s Who in BtoB.” In 2006, John was named a “Young Global Leader” by the World Economic Forum. <br><br>

John earned his BA at Dartmouth, is married to Lesley and is the proud father of a 4 year-old daughter (Caroline) and a 3 year-old son (John Jr.). <br><br>

(Please feel free to forward the invite to friends and colleagues who might be interested in participating. Prospective members can go to www.85broads.com to apply to become a member of 85 Broads)
<br><br>