Screening of "She Started It" In Honor Of Women's History Month 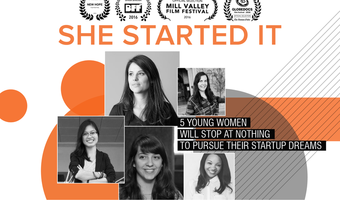 Join Ellevate Network LA in celebrating Women's History Month with a screening of "She Started It", a documentary following five passionate young women who strive to compete in the tech world.

Need a reason to explore the expanding skyline of DTLA and celebrate the ongoing advancements of women in tech? Join us Thursday March 23rd, 2017 for an advanced screening of "She Started It."

Light bites and refreshments will be provided.

Launched in 2013, She Started It is a feature length documentary film on women tech entrepreneurs, shot on location in Silicon Valley, NYC, Europe, Vietnam, Mississippi & more, that aims to highlight successful role models for young women. It is the first film to show the behind the scenes of running a tech start-up as a young woman.

Through intimate, action-driven storytelling, SHE STARTED IT explores the cultural roots of female underrepresentation in entrepreneurship—including pervasive self-doubt, fear of failure, and risk aversion among young women. It exposes, too, the structural realities women face as they become entrepreneurs, including lack of female role models and investors, and the persistent dearth of venture capital funding made available to women-led companies.

Hi ladies, just wanted to share that parking tonight is available at the building. PLEASE NOTE: If you arrive AFTER 5pm parking is a flat rate of $6 : )