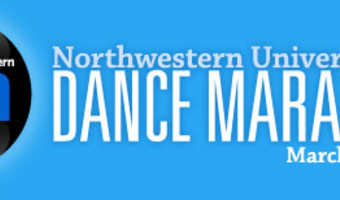 85 Broads is proud to sponsor the Northwestern University DANCE MARATHON! More than thirty years ago, Dance Marathon, the philanthropic child of Alpha Tau Omega fraternity and the Associated Studen...

Twenty-one couples danced for DM in 1975.

It was called the “Dance to Give Them a Chance” marathon then, and it benefited the American Epilepsy Foundation and the National Association for Retarded Citizens. Fifteen couples made it through the fifty-two hour marathon, raising $9,100 at Blomquist Memorial Gymnasium. Today, Dance Marathon is one of the world’s largest collegiate philanthropies, and this year we are proud to be celebrating our 33rd year!

While DM is now bigger than ever, some things never change. Couples are still sponsored by dorms and student organizations. The winning couple in 1975, Donna Miller and Tony Krileff, was sponsored by Bobb Hall and a local liquor store. And although Frank Sinatra, Jr., doesn’t always visit anymore, DM does attract the attention of people like George and Barbara Bush, Jeff Probst and Scott Wolf, and NU alumni David Schwimmer and Cindy Crawford. Chicago celebrities, like former mayor Jane Byrne and Bears players Mike Tomczak, Keith Van Horne and Trace Armstrong, have even been known to stop in and dance.

However, DM has seen more than a few changes over the years. DM 1976 saw a new venue as the dancing was moved to Patten Gym and the dancing time was lessened to twenty-six hours. The next year, though, was when DM found its current home: Norris University Center, where students have been dancing for thirty hours at a time ever since. Little amenities for the dancers were also added over the years, like the DM spa, where manicures and haircuts are given on the floor of Norris. Chicago’s Second City comedy troupe paid a visit in 1984. Since that time, popular bands and performers have been a highlight of DM weekend. Most importantly, DM now includes over 500 dancers, each couple raising at least $750 for the honor of dancing, and thousands of student volunteers.

Since its inaugural year, DM has raised over $6.5 million for various charities.