Women in the World Texas Salon 2018 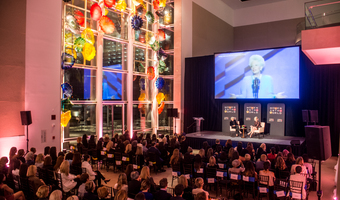 Women in the World is coming back to Texas on Nov. 5th.

Women who are on the front lines all over the world come to our stage to tell their stories at our summits and salons. They are activists, CEOs, peacemakers, entrepreneurs, and firebrand dissidents. They've saved and enriched lives and shattered glass ceilings in every sector. With vivid journalistic narratives, stirring videos, and provocative discussions, Women in the World is the premier showcase for women of impact and for the men who champion them.

Joining us in Dallas is literary legend, Isabel Allende, the American-Chilean novelist who has sold more than 65 million books, been awarded the 2014 Presidential Medal of Freedom and will receive an honorary National Book Award later this month. Also with us will be two women who have been in the boiler room of American politics for decades: Minyon Moore, former CEO of the Democratic National Committee and director of White House Political Affairs and Leah Daughtry, CEO of the 2008 and 2016 Democratic National Conventions as well as a preacher and political strategist. The first and often the only African-American women to wield such behind-the-scenes political power, they've written a new book called For Colored Girls who have Considered Politics.

We'll also be joined by a courageous whistleblower who has risked everything to shine a light on Australia’s refugee crisis which is being called a humanitarian emergency with many of the child asylum seekers held in detention centers on the island of Nauru for five years now.

Joining us too will be Dallas businesswoman who will be named our newest Toyota Mother of Invention.

Visit womenintheworld.com to see past participants, and learn more about exciting programming updates.

Women in the World and Ellevate are partnering for this special event. Registration is free and exclusive for Ellevate Emerging, Achiever, Innovator, and Executive Council members.