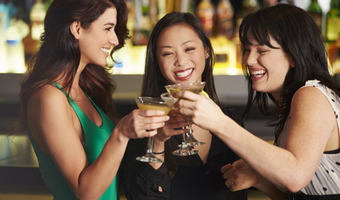 Join Ellevate members and non-members on the 21st floor of The London House for a casual evening of networking and delicious cocktails!

Join Ellevate members and non-members for a casual evening of networking and delicious drinks at London House! Learn about upcoming events, programs and opportunities to engage with Ellevate Chicago and Ellevate National.

No refunds after Friday June 21.

About The London House:

The London Guarantee and Accident building is one of Chicago's and the nation's most visible and prominent pieces of real estate located at the corner of North Michigan Avenue and Wacker Drive.  The London House was one of the foremost jazz clubs in the country, once home to such luminaries as Oscar Peterson, Ramsey Lewis, Bill Evans, Dave Brubeck, Marian McPartland, Dinah Washington, Cannonball Adderley, Erroll Garner, Ahmad Jamal, Nancy Wilson, Barbara Carroll, Bobby Short and many others. On the occasion of its 20th anniversary in November 1966, Frank Sinatra Jr. headlined the club in his Chicago debut. Renovated in 1946 by George and Oscar Marienthal, the club was crafted from the original Fort Dearborn Grill. Known as a "famed dining spot" the club was revamped in 1955 to include jazz music and stay open until 4 A.M. rather than be a strictly dining establishment that closed at 10 P.M. After jazz had finally waned as popular music, losing out to rock and roll, The London House closed during the early 1970s.