Membership allows you to make valuable connections with the global Ellevate community.

Former Wall Street executive Sallie Krawcheck is on to her next investment. 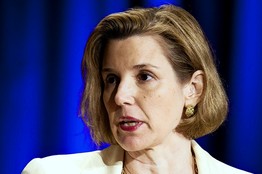 “The fund will invest in the 400 top-rated companies in the world for advancing women. It is the first and only of its kind,” the email to members said.

It’s open to any investor, and the Ellevate Network also plans to steer an undisclosed portion of its revenue to the fund, meaning anyone who joins the women’s network automatically becomes an indirect investor. Members who want to invest directly in the mutual fund can purchase institutional shares.

Ms. Krawcheck and her partners are hoping to tap an underserved market of female and millennial investors looking for “impact investing” opportunities that are also lucrative. A recent Center for Talent Innovation study showed 52% of women in the U.S. wanted to invest in organizations with diverse leadership, compared to 42% of men.

“For women and for millennials, for what I call the next wave of investors, it’s not either or,” Ms. Krawcheck said in an interview. Their view is, “I want to have a fair return and I want to have an impact.”

Ms. Krawcheck has been eyeing an investment arm for her women’s network ever sinceshe purchased it last year. She opted for a mutual fund instead of a venture or hedge fund because it offered the most transparency, she said.

As for the women network’s new name, Ms. Krawcheck said she wanted a moniker that reflected the group’s femininity and movement. The name hit her while she was sitting on the couch one Saturday after going for a run.